Thigh Master have been mainstays of Brisbane’s thriving underground guitar scene for years now, building up a formidable reputation for both their fierce live shows and their early recorded output. Their first two singles Head Of The Witch (2014) and Songs To Wipe Your Mouth To (2015) both sold out their initial runs after charming fans both in Australia and abroad with their urgent and catchy tales of inner-city malaise. They have already played with Guitar Wolf, The Coathangers, Ty Segall, Ariel Pink, The Clean, Real Estate and Courtney Barnett. Early Times, their debut LP, was recorded and mixed by Blank Realm guitarist, Luke Walsh. Once more Matthew Ford and company turn this introspection and angst into high art, with another infectious offering which is sure to turn heads in all the right places. RIYL: Kitchen’s Floor, Buzzcocks, Blank Realm.

“I haven’t been excited about guitar pop like this in a while, transporting a presence of Polvo/Archers-style string bend, plus huge riff from some 8000 miles away, familiar but still vital, and given exuberant, shook-up life.” —

Be the first to review “Thigh Master – Early Times” 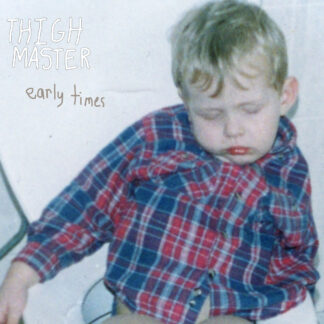