Equipment Pointed Ankh – From Inside The House

OUT NOW
Equipment Pointed Ankh’s vitality and quirky liveliness light the flame up from Cassiber’s eternally burning coals. A rousing call to arms!

The third full-length from Kentuckiana studio chiselers EQUIPMENT POINTED ANKH – was recorded on the Windy upper end of I-65 and fortuitously blown back home to their port town hamlet in an effort to take full advantage of Morricone’s Peavey Rage.

Seven (eight?) tracks of Great Lake inspired genre transgressions as filtered through the muddy minds of Ohio Riverpeople! Instrumentation within this program includes (but is not limited to): drums, pianos, plastic clarinets, 16 string guitars, sliced up youtube clips, sounds of people walking made by expensive microphones, the keyboard from “Superstitious,” a landline telephone and vigorous employment of The Satanizer.

“Porcelain… ceramic… copper… brass… I’m thinking of something else” ponders EPA newcomer Jenny Rose, pulling back for a wide angle meditation on art, life, and the rental biz. Her ruminations are fleeting, however, as the Ankh train soon departs for further deviations, descending blurrily through a dim forest of reverberant melodica, synths-of-paradise and bowed chimes-of-underworld… until – at last! – our protagonists are swallowed whole, as one, in flame, by a pulsing pink horizon.

Recorded at Electrical Audio in Chicago, IL and End of an Ear in Louisville, KY – Fall of 2021. Engineered & Mixed by Taylor Hales at Electrical Audio. Produced by The Barney Rubble Trio. Mastered by Seth Manchester at Machines With Magnets in Providence, RI.
Art by Bill Nace in Philadelphia, PA. Deity defying screen print by Dan Davis at Kin Ship Goods. Pressed by Polish folk in December of 2022. To be released shortly hereafter by Bruit Direct Disques in Paris, FR. 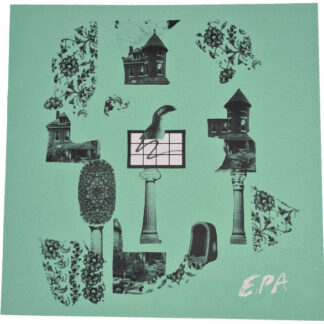 You're viewing: Equipment Pointed Ankh – From Inside The House 20,00 €
Add to cart