NEW
Going nowhere in your head, still hearing The Go-Betweens, quirk and crunch à la Monochrome set. How that makes for an imaginary Paris of 2020

Here’s a document of a Paris now gone. The city was yours and ours. Strolling down the streets in your tired jeans and bright red polo shirt, a gentle breeze rustles a girl’s long hair or maybe it was a boy, passing by in the aluminum sun. Sitting at your neighborhood café, talking with your friends, one of them a traitor, about the last football match, you are French and also maybe support Chelsea, a good move will enchant the evening. Now you work, now you don’t, measly government money spent on instruments and chemicals. Drinking a can of beer outside the noise gig Are you 15 years old? Or are you 35? Maybe you’re 62 all of a sudden. Laughing out loud in the street, at some joke that, at some point, was on you. Maybe start a fight, too much of this and too much of that under a bright white moon. You move along and there’s no reason for concern, everything is wrong anyway. It’s Paris and it’s the suburbs, a seamless grey landscape that is your past and present, it’s a reverie, might as well kill yourself again tonight.
The city’s now locked down and maybe it’s best to leave it to die. The law can’t erase the memories of what will come back anyway, against it. Paris still jingling in our heads, it’s a stretch from Françoise Hardy’s timid voice to the best French indie pop band you’ve never heard of, Freluquets. It’s a stretch, still fighting in the streets over the capitalist laws or over a girl, or was it a boy? Gentle strumming, lonely notes for lonely garçons, now men. Going nowhere in your head, still hearing The Go-Betweens, a bit of quirk and crunch à la Monochrome set. How that makes for an imaginary Paris of 2020 going head on at a very slow speed, very slowly and maybe a bit numb but never limping, stumbling over, head over heels at a backwards pace. There is one smile, the dissolving smile of the future, neither here nor there. The City is always yours and ours for the taking, in a slow punch, our raison d’être.

Be the first to review “City Band – City Band” 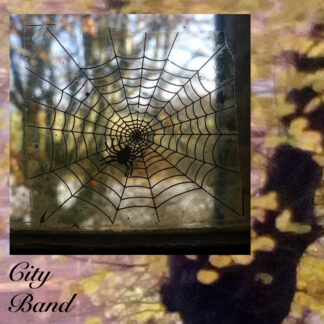