The pataphysical toy music of Klimperei, a collective project lead since 1985 by Lyon based Christophe Petchanatz, does a lot out of many smalll things – dismantled toys, organs with burst pipes, squeaking detuned guitars, loose broom.. Author of more than fifty records and tapes, disseminated on dozens of labels worldwide, Klimperei recreates a world within a world, where childhood’s music boxes would have transformed into a carousel made for adults, where waltzes would have muated into progressive drunkard chants, where postpunk revisits lo-fi chamber music. An art of modesty and discretion that never gets in the way of audacity and ambition, but an ambition that steers away of commercial channels. Nino Rota or Erik Satie have often been conjured about him, one could also find parenthood with other unclassifiables such as Chris Knox, Pierre Bastien, Ghedalia Tazartes or Pascal Comelade.

Sung in english by Eric Chabert, initiator of the « Underground Productions » label and sadly deceased just before the release of the record, the songs on “Dealings” are adaptations of poems by John B Cornaway (1957-1994), author of “Heligoland”, who published Petchanatz first texts while Chabert was releasing the first cassettes of his group Los Paranos and of Klimperei. «30 years later, to unite as if by accident those two fellows, is a kind of strange fiction”, admits Petchanatz. “John B’s texts, I don’t remember if it was me that sollicited them or if it was him that submitted them. Eric’s singing, his voice, already engaged with Totentanz (1987) and Dents (2005/2006), and this way we had to spend our afternoons, making music instead of mulling together over Eric’s sickness. All of it fits.» 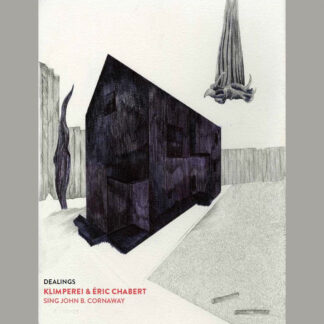