Soft, caressing and subtly disturbing, Frightening Lights’ songs move like menace through fog. Singer Elizabeth Downey says she first envisioned the songs as a kind of deathbed confession, their violence is carefully suppressed, modulated perhaps through long penitence. Shreds of instrumental sound – a funeral organ, an offkilter accordion, discordant bowing on a borrowed danbo – flit in and out of the peripheries, creating eerie,

Downey formed Frightening Lights with her partner Dan Hawkins in 2007 after a sojourn in Russia, where she went to study fine arts and returned with a fascination for Russian and Polish folk music. Returning home to Melbourne, she found herself as drawn to Slavic influences – including the Russian poet Bulat Okudzhava and Polish singer Slawa Przybylska – as to rock artists like The Triffids, Rowland Howard and Marianne Faithfull.

Back in Melbourne, Downey and Hawkins began recording at home on an enormous, two-inch reel-to-reel recording deck, working and reworking their spare material. Two of the duo’s songs appeared on Melbourne compilations- A Warm Cupboard from Albert’s Basement label in 2009 and the Swan V Raptor on Dan Lewis’ Special Awards Records in 2010. The rest evolved gradually into the dream-like textures of this debut full-length.

Downey sings and plays guitar on this debut, while Hawkins mans a rack of keyboard instruments – a Farfisa, a Hammond and an eerie Conn organ – as well as bass. There are no drums on the album, almost no sense of time at all, as melodies float like smoke over blasted territories.

Downey’s lyrics trace elliptical connections between the novels she reads, the films she sees and the ordinary experiences of daily life. The opening “Pere LaChaise” recalls a hazy interval in Paris, where Downey, sick with pneumonia, wandered nonetheless through the famous cemetery, deathly ill. “The Return of Genghis Khan” conflates her fascination with the Mongol warlord, a kitten that she once named after him and a romantic spat with her partner into a single, slow moving fever dream.

Earl Kuck calls the Frightening Lights « almost Bad Seeds-like with female vox,” and this self-titled debut has, indeed, some of the same eerie, subdued resonance as Cave’s recent We Know Who You Are. If you like your menace soft, wrapped in lullaby sweetness and still profoundly unsettling, turn on the Frightening Lights 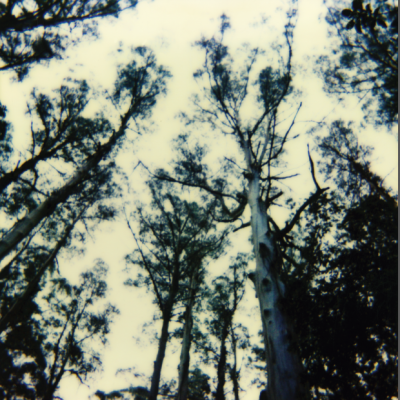