Junior Makhno – The theatre of the macabre EP

A precarious concept album for the tragic era of the working poor, Done and over with in 6 tracks under 10 minutes.For crying bones and bludgeoned hopes. Mastering at studio Sound-o-mat by Rob V. Plays at 33 rpm.

Byron Coley ~ the Wire : Amazing horror-hop Metal hybrid. Have listened to this a few times and wish my son was around to help with my vocabulary. It comes off a little bit like a ghetto-recorded soundtrack to a movie starring Glenn Danzig as a vampiric country priest who rides a little donkey into the city to attack MF Doom. But that doesn’t really get at the root of it. Its essence is more damaged than that. Can this somehow all get traced back to Metal Urbain ? If so, I’d like to see the map.

Doug Mosurock ~ Dusted Magazine : Some of you have written in, asking what happened to the horror-core movement that hip hop was holding down back in the mid-‘90s. From the sounds on this EP, it went to France, where it moonlights as black metal. No foolin’ – this one is split right down the middle, one side all Baron Samedi in a ghetto gown, the other busy gluing carpentry spikes to a wristband, then the two sides meeting together at the end of the record for a Judgment Night of its own. Your skepticism is expected, but this thing actually delivers, at least on the grim side of the streets – I always felt that the first Gravediggaz album left some questions unanswered, and yeah I know there was a second, but I mean real questions. This begs to answer them in a very real and threatening manner.

Jay Hinman ~ Detailed Twang: Strange and pleasingly ill-fitting mash of distorted horror rap, electronic tweedling, screams, monster sounds, and manipulations of all sorts. Mostly instrumental, and heavy in every sense of the word. Kindred spirits of the aforementioned CHEVEU for sure. 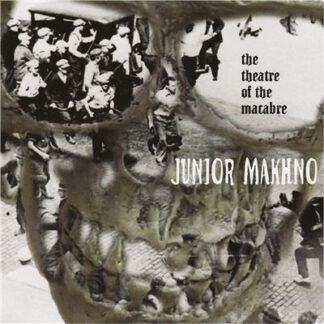