« Mercer County is in central New Jersey, main city is Trenton (they make pork roll) but the more known town is Princeton (they have the college where Einstein spent time thinking grandiose thoughts). Additionally many great Revolutionary War battles and glorious victories happened there. It was also a place with a rich, loamy history that may not necessarily appeal to the average guy mowing his lawn but for all of us drooling music maniacs there was much to be proud of or at least alleviate boredom, whether it was the vastness of the Princeton Record Exchange, the dangerous punk shitbox of City Gardens, the perplexing urban weirdness of Trenton Avant Garde Festival, the headquarters of college rock/punk/hardcore mail order catalog Burning Airlines, or the harmlessly unscrupulous bootleg label Scorpio.

Yet other than totally solid straight edge purists Mouthpiece, there really wasn’t much musical export of note. Until Home Blitz! They’re from Mercer County. They probably could have been bestowed large ornamental keys if they didn’t leave the fucking county years back! What the hell. Because the music of Home Blitz is totally great! It was great as shards of self released suburban teenage power pop noise, it was great as increasingly complex records for Richie Records//Testostertunes and Mexican Summer that juxtaposed gargantuan forward leaps in melodic construct with plunges into utterly obtuse weirdness, and it’s great as whatever the hell this record is. Because while there are moments on this new ep that do feature the « classic » Home Blitz breathless guitar pop perfection (see Chris Stamey « Summer Sun » or the Alternate Learning to Game Theory arc of Scott Miller for reference) things quickly head into territory that could only be deemed « uncharted ».

« Final Decay » offers what on one hand is yet another excellent surging HB hookfest but with handclaps, programmed drums, and a burbling bass (for what is possibly the only audible bass sound on any Home Blitz record, they sure chose a memorable one) that shoots for the Top 40 before shifting abruptly into a bizarre narration. Next on « What I Say I Mean » you receive a somewhat traditional British folk-esque wordy acapella vocal song with a persistently odd sound art undercurrent. The b side is a single dense and lusty piano/violin epic (« Real Green ») that’s a lunatic version of Shirley Collins and goes from jaunty to wistful to spiteful and culminates in « Sloth »-ish folk rock triumph.

But none of these words do justice to what is a genuinely unique collection of post-Mercer County songcraft that will go down in history as one of the grandest specimens of art pop perfection that county, and yours, will ever hear. » – Max Milgram (Philadelphia Record Exchange / Watery Love, et al) 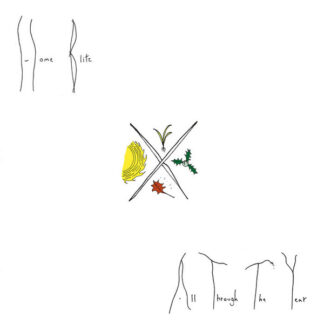